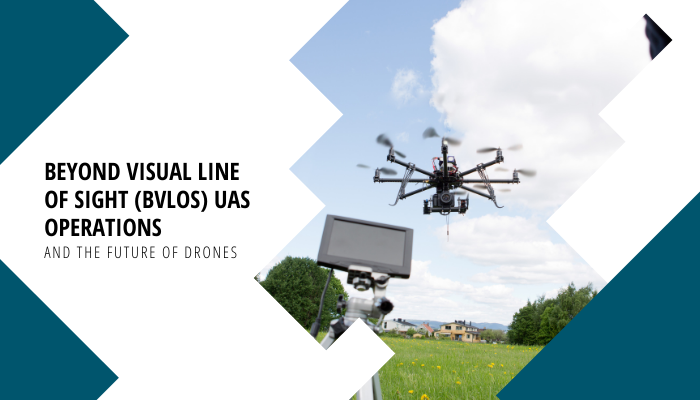 What is Beyond Visual Line of Sight (BVLOS)?

Beyond Visual Line of Sight (BVLOS) UAS operations are flown beyond the pilot's line of sight. These operations allow drones to fly at greater distances and allows for maximum efficiency. Flying BVLOS represents a huge opportunity to expand UAS operations and use the technology to its full potential. Because the drone operator can not see the drone, this does increase risk factors such as potentially crashing into objects. For this reason, BVLOS operations are regulated by the Federal Aviation Administration (FAA.) To date, only 1% of BVLOS waivers submitted to the FAA have been approved.

Expanding BVLOS for Commercial and Government Use

Allowing for BVLOS UAS flights would greatly expand the drone industry and open the door for more advanced commercial drone use. Other countries have already begun to expand UAS use to include BVLOS operations. Many commercial drone operators in the United States hope the FAA will ease restrictions and make it easy to obtain a waiver.

During the FAA Integration Pilot Program phases, many companies and public safety departments have tested BVLOS to ensure safety. The FAA is known for its risk-averse regulations, and the only way to ease restrictions is to prove BVLOS drone flights' safety.

BVLOS will allow for more complex UAS operations such as inspections, drone deliveries, and mapping for the commercial industry. We are starting to see the FAA ease restrictions and grant approvals for BVLOS commercial drone flights.

Walmart teamed up with Zipline to bring drone deliveries to customers in the near future. Walmart is also pilot-testing drone delivery in North Carolina. North Carolina has been a long time early adopter of drone technology. They have been making strides with the NC UAS Integration Pilot Program led by the North Carolina Department of Transportation (NCDOT.) In March 2019, NCDOT and its partners, UPS, Matternet, and WakeMed, launched the US's first-ever commercial drone delivery service. Recently, NCDOT and Skydio received the first ever state-wide BVLOS waiver.

North Dakota is another state dedicated to the advancement of drones. This year the state of North Dakota announced it's working with the Northern Plains UAS Test Site (NPUASTS) to create a statewide BVLOS network.

Drones will become a significant part of a city's infrastructure; safety and situational awareness will be critical to successfully integrating drones into our daily lives.

Public safety departments such as law enforcement are one group that would greatly benefit from being able to fly BVLOS operations. Chula Vista Police Department is paving the way for groundbreaking BVLOS operations. In July 2020, Chula Vista PD was the first police department in the nation to receive beyond line of sight FAA approval. This approval came after months-long collaboration with the Chula Vista Police Department and the San Diego UAS Integration Pilot Program.

Chula Vista's FAA approval grants them access to fly Skydio drones BVLOS during emergencies provided they don't fly more than 50 feet higher than the nearest obstacle, stay within 1,500 feet of the pilot, and return to visual line of sight "as soon as practical."

In August 2020, the FAA released the BVLOS waiver guide for first responders during its annual Unmanned Aircraft Systems Symposium. This new waiver will enable public safety departments to protect communities and officers in the line of duty. BVLOS drone operations bring a whole new level of situational awareness in situations that might be too dangerous for officers.

This new waiver will open up a wider range of UAS use cases for law enforcement and public safety departments. The nature of emergency operations makes it difficult to remain compliant with FAA regulations leading officials to abort UAS missions.

Unmanned Traffic Management (UTM) systems are a big piece of the puzzle towards fully integrating UAS into the NAS. For UTM systems to work, you must first identify the drones flying in the sky at any given moment, just like airplanes. However, the radars built to detect planes can't detect drones.

Drones pose a new set of challenges when it comes to identifying them.

In the case of Chula Vista, the department uses drone detection to manage their drone fleet. Not only does this give them complete situational awareness, they can also be transparent within their communities about their drone programs. Cities and fusion centers can use drone detection in the same way to connect data among several precincts.

AirGuard is a purpose-built Airspace Management and Drone Detection Software Platform for real-time visualization to mitigate drone threats and manage existing drone fleets. Police departments and companies can use AirGuard to manage their drone programs and gain situational awareness to make flying safer. AirGuard is fully compliant with the FAA and FCC.

AirGuard works by integrating with electronic drone detection technologies like Radio Frequency (RF) sensors and high-resolution drone radars to detect drones and pilot locations. The system provides security personnel with critical information such as drone ID number, make/model, payload capacity, and real-time GPS location for both the drone and pilot. AirGuard integrates data from multiple sources via APIs from systems such as existing security systems, allowing security personnel to manage their airspace in one easy to use interface.