There is no debate that drones are here to stay and drone adoption is growing exponentially in the private, commercial, and law enforcement sectors. U.S. DOT Secretary Elaine Chao announced @ CES 2018 that the number of drones registered in the US has surpassed 1 million. That means 1 million people knew about the requirement to register a drone, took the time to do it, and paid the registration fee. According to industry experts, the number of drones in the sky is closer to 7 million and might reach 10 Million in 2019. This means that Industry experts estimate that only 1 in 7 drone owners register their drone.

Drones pose a new set of challenges when it comes to identifying them:

Due to these unique challenges, the FAA looked at creating a Remote ID system which is simply explained as a way to electronically tell (from the ground) what drones are flying overhead.

The initiative was launched due to public safety and law enforcement needs and escalated due to the large number of drone incidents over the past few years. The goals of the Remote ID system is to INCREASE SAFETY, ACCOUNTABILITY, AND ENFORCEMENT OF LAWS AND REGULATIONS.

The FAA identified a set of challenges that viable solutions have to achieve for the program to be successful. Potential technology solutions were analyzed and rated based on the following five prioritized criteria:

Ease of compliance for owner/remote pilot

Taking the above consideration, the FAA posted an RFI with the possibility to select up to 8 companies. The technologies proposed centered on using either Broadcast Remote ID or networked remote ID through the Mobile application.  While both technologies have advantages and disadvantages, the FAA took in consideration a possible hybrid solution.

When it comes to ease of compliance, the FAA already has experience on this subject on how difficult it is to get people to register a drone. Around 1 in every 7 owners followed the current procedure and registered their drone. Knowing that this will be an uphill battle, the FAA looked at an option to achieve compliance starting from the drone manufacture. The goal was that whatever technology they select, the manufacturer will not be able to market or sell in the US unless their technology is compliant with Remote ID. Whether through network or Broadcast solution, the manufacture will automatically send the required information to an FAA database that will alert local enforcement if a drone goes airborne and is not registered similar to spotting a car driving without a license plate. While the following idea was not discussed part of discussion but individual that are not following the rules can be made subject to fines to help assist with the enforcement.

The second criteria that the FAA evaluated was readiness for implantation. Understanding the urgency of the matter and the possible threats that drones can pose to infrastructure, prison systems, stadiums and airport, they looked for a COTS solution (commercial of the shelve) or has the potential to be ready in 2 years or less. Working directly with Law enforcement, the public sector, and Airports, 911 Security launched 8 test pilots in 2018 to showcase in real-time our ability to establish identifying drones operating nearby from manufactures that have agreed to participate in our initiative.  We were able to clearly demonstrate a proof of concept that can scale up once manufacturers are required to participate in the program.

The third Criteria was operational performance and security. The FAA understood that this is a security initiative and having a reliable system is imperative for the advancement of commercial drone usage. Moreover, law enforcement must have access to PPI (personal private information) database to continue successfully and safely.

The 4th Challenge the FAA looked to resolve was cost. While the FAA was adamant about security, they didn’t want to enforce hardware or software solution that will increase cost and weight on the manufacture and become a burden on the industry. The preferred solution would come from a software or firmware update.

The last challenge was interoperability. The ability for various industry from law enforcement, critical infrastructure, prisons and airports to adapt this technology in a permanent or mobile deployment without the need to deploy expansive infrastructure.

Both the RF Broadcast and network integrated method checked many of the above criteria and made it lucrative for the FAA to consider.

While the initial motivation for remote ID came out of a public safety initiative, we started to see these discussions pivot to airspace management. By unlocking the benefits coming from the remote ID initiative and developing sophisticated airspace management solutions, we can move closer to safely integrating advantageous drone use while curbing the malicious use of drone.

The following two case studies will help explain how the remote ID will be integrated and its benefits:


Case Study: Securing the public and private sector from a new threat

Industries are well aware of the issues and risks that drones pose on public safety. Few incidents made headlines like the one at Gatwick Airport, that incident prompted many security professionals to consider drone threats and deploy drone detection. Those companies and organizations that have implemented drone detection systems are logging issues daily.

In this case study, we are diving into the data collected from a drone detection system installed In a major U.S. city. Late December 2018, 911 Security deployed AirGuard by 911 Security, a software platform that integrates drone detection data from Aeroscope and ApolloShield with the capability of remote ID and ability to track various brand and models of drones in real-time through a single interface.

Once AirGuard was installed, our system tracked and recorded an average of 50 drones a day within a 2-mile Radius of the local airport. The city’s popular “strip” is located approximately one nautical mile from the airport. Since “the strip” is inside the 5-mile “No Fly Zone,” each of those flights violated federal regulations.

After collecting and recording the data, we layered the drone data over the airport coordinates in 2-mile and 5-mile radius circles which included airport flight landing paths. 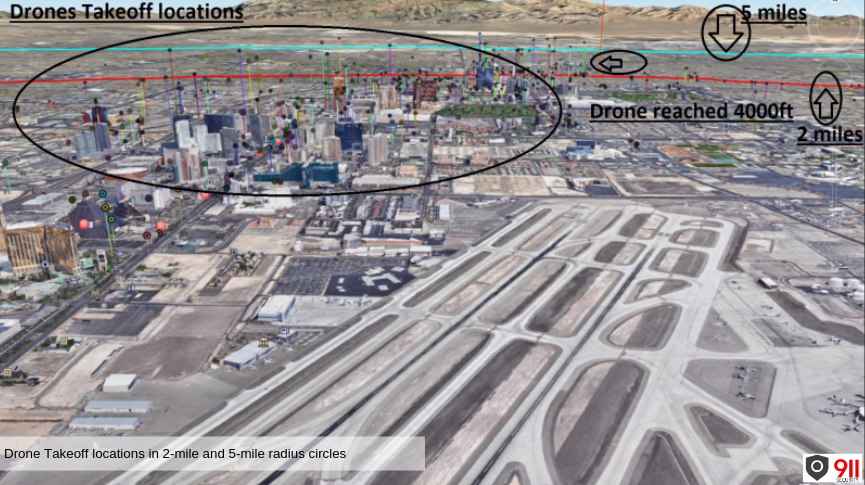 The results were shocking, 785 drones flew within one mile of the international airport in the four week period. Upon analyzing the data further and looking at drone flight altitudes, we learned that nearly 300 drones flew over the allowed range of 400 ft and one drone flew over 2,100ft. 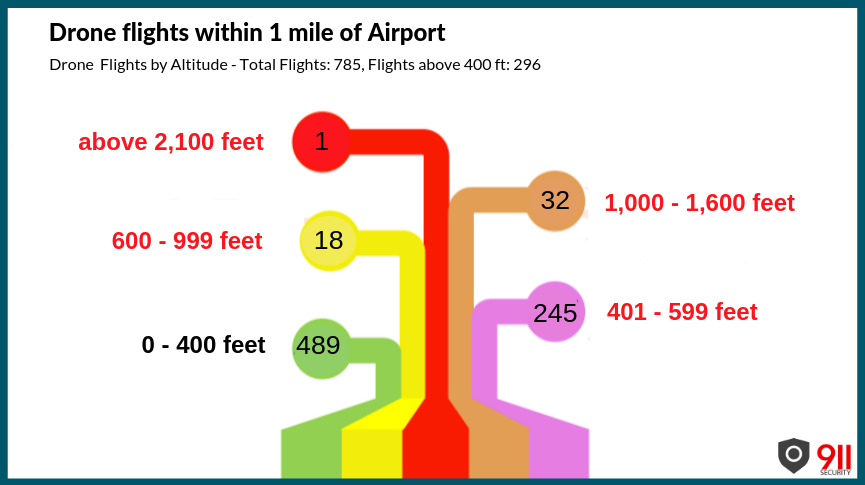 Our case study got more interesting when a YouTuber and a drone pilot, going by the nickname BrandonON, uploaded youtube videos with footage of his drone flying over various famous landmarks such as: casinos, hotels, and Hwy 10, The video, uploaded on January 28, 2019, was flagged by several casino property owners. These owners were aware of our system in their area and reached out to us for help.

Since the Remote ID is still in concept stage and of course we don’t have access to the FAA drone registration database, we used our solution to capture the unique identifier number and some old school detective work to find the pilot. 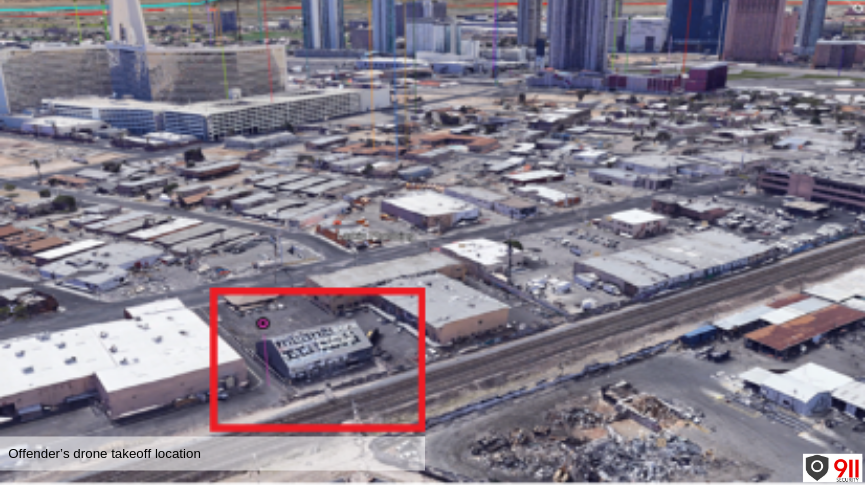 Minutes after analyzing this data with Google Earth, we were able to identify the take-off position and the drone’s unique identifier number.

Using the unique identifier from the pilot’s drone, we were able to track all of the pilot’s flights in this city and in the other cities where we have AirGuard deployed. The pilot was later identified, and information about the drone flight was shared with the FAA.

AirGuard is a purpose-built Airspace Management and Drone Detection Platform for real-time visualization and litigation of drone risks and threats. AirGuard is fully compliant with the FAA and FCC.

AirGuard Integrates with electronic drone detection technologies like Radio Frequency (RF) sensors and high-resolution drone radars to detect drones and pilot locations providing security personnel with critical information like drone ID, make/model, payload capacity, and real-time GPS location for both the drone and pilot. AirGuard integrates data from multiple sources via APIs from systems such existing security systems which allows security personnel to manage their airspace in one easy to use interface.

On May 9, 2018, the FAA announced 10 companies that were selected to be part of UAS Integrate Pilot Program (IPP) that outlines 10 experiments and tests on how drones will be integrated in the US. The City of San Diego and Chula Vista were selected to be one of the 10 awards to help establish the best practices and procedures for law enforcement to integrate drones into official operations safely. The goal was to establish best practices, policies, and procedures for law enforcement to fly drones beyond line of sight in response to 911 calls.

Witnessing how several cities were subject to public outcry that resulted in closing down the UAS program when they attempted to launch it without gaining the support of the public, The City of Chula vista quickly announced the award and reached out through various social media networks to make sure they kept the public aware and engaged. What’s more, they decided to take it an extra step in showcasing transparency.

Chula Vista Police Department (CVPD) asked us to be part of their program and provide 3rd party tracking for all drone flights. All CVPD drone flight information will be tracked and made available to the public. After a 24-hour delay, all flight data is uploaded and posted on the city’s public website.

CVPD is taking transparency and community policing very seriously as they inform the public and continue to integrate drones as a first responder (DFR).

Using Remote ID to track drones is an application that is not unique to law enforcement. Several large enterprises that are currently using drones want to expand their use to more applications and outside vendors once they can track accountability using Remote ID. Rod Elrifai project manager for General Electric wind turbines explains precisely this. He says “this has passed the proof of concept stage years ago, we are looking to scale. But with scale comes may safety and security concerns that we can risk unless we show accountability.”

What is exciting about the Remote ID program is that we are about to witness a giant leap when it comes to drones adoption. Similar to the aircraft registration program, the Remote ID program will not be a US-only initiative but will reach worldwide to become a world platform to manage and share our airspace with drones. Efforts like Remote ID that improves security and enhances accountability is what will cause the exponential growth of drones in the world.