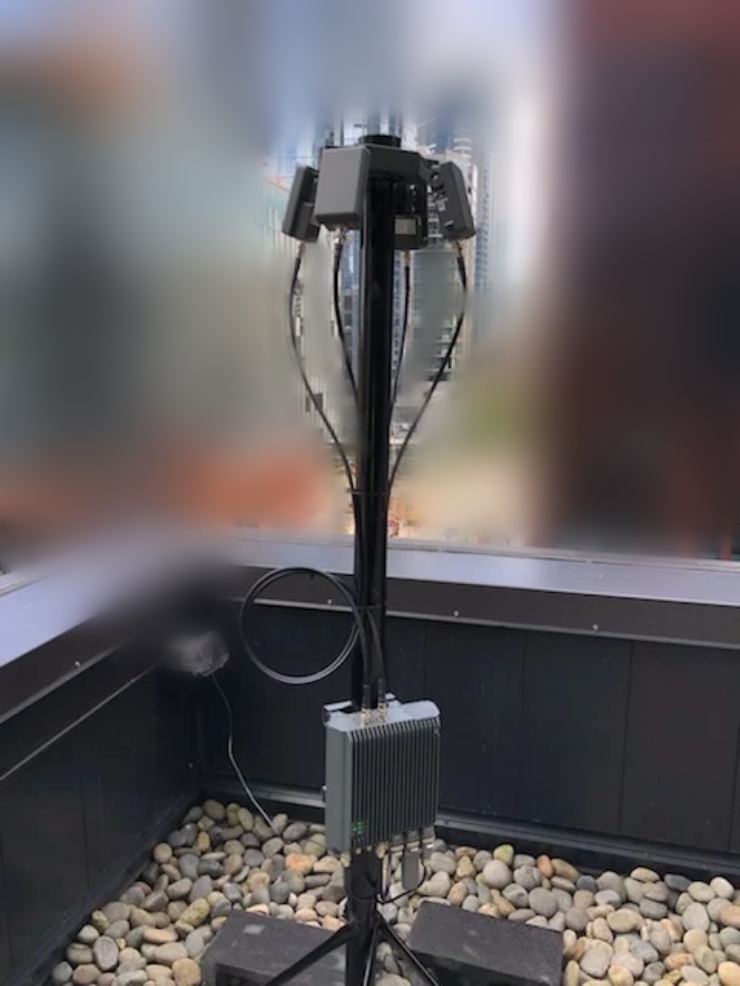 DJI Aeroscope Review: Features, specs, and how it's used in layered drone detection

As the number of drones flying increases, so does the potential for airspace safety and security challenges to areas such as airports, prisons, stadiums, companies, and critical infrastructures. DJI, the drone company that currently has the largest market share released a drone detection system called Aeroscope. AeroScope can identify and track in real-time the majority of  DJI drones (75%) flying in our skies by monitoring and analyzing their electronic signals to gain critical information. The data obtained allows AeroScope users to monitor drone activity in their airspace and work with law enforcement to identify violators.

Our 911 Security Team has demoed and tested the AeroScope system in different environments, such as airports, stadiums, prisons, and densely populated cities. We found that many AeroScope features performed as advertised, and others provide opportunity for enhancement.

Aeroscope can be used in any environment that might be threatened by illegal drone activity. Airports, prisons, stadiums, companies, critical infrastructures, public open-venue events, and military installations can benefit from securing their airspace from malicious drone use.

Malicious use of drones includes:

Remote ID is the real highlight of what AeroScope was developed for; essentially, it can act as a way to allow the FAA, law enforcement, and Federal security agencies to identify drones flying over a certain area and lower the risk of bad actors. This feature makes it possible to unlock critical drone data such as the location, altitude, speed and direction of every DJI drone within radio range, as well as the location of the drone pilot and the serial number of the drone. Remote ID is also seen as a critical component to a unified Unmanned Traffic Management (UTM) system, which will simultaneously track drones and traditional aircraft in the crowded airspace.

Aeroscope allows users to implement their own GeoFence zones around their property. Geofencing allows the creation of a ‘warning zone’ and an ‘alert zone’ based on a specific block or street. Security staff can create a variety of different SOP’s based on each location’s alert level needs. 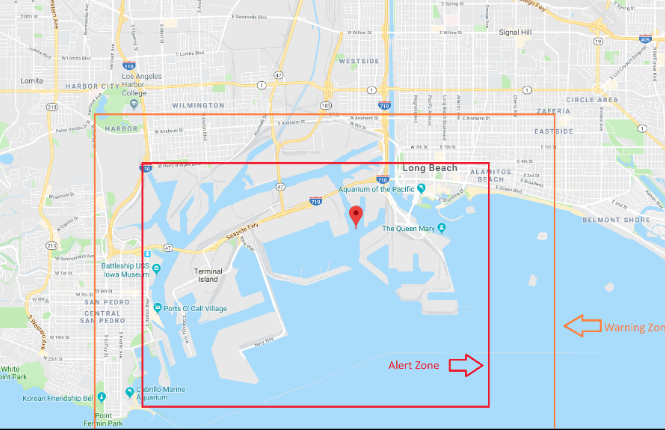 Detects the Majority of Drones

DJI drones are the most popular consumer drone on the market; the company holds roughly 75% of the market share. AeroScope can view and relay telemetry data sent by the command and control link from DJI brand drones to its remote control, making drone data accessible to the end-user.

Real-Time Tracking of all Detected Drones

AeroScope provides an accurate and reliable system to track drones detected within your secured airspace. When a drone is turned on  anywhere within range of AeroScope’s antennas, users can see a live view of its location, altitude, speed and direction, and serial number. Through real-time tracking, the AeroScope interface shows every movement the drone makes.

Much like with real-time tracking, AeroScope gives an accurate location for the drones it does detect. Users of the system, can gain the precise location of where a detected drone is flying.

Using AeroScope, you can pinpoint the location of the drone pilot in most cases. During our trials, we were able to see the controller’s (pilot) position for most of the flights with a high degree of accuracy.

Due to federal regulations, some environments are ill-suited for radar due these restrictions and technology interference. Airports in the U.S. must abide by FAA regulations that state airports are not allowed to use active detection technology such as radar. Airports in the U.S. must remain FAA and FCC compliant which makes passive RF drone detection the only legal option at this time. Since AeroScope listens in on a DJI drone’s existing communications link, it makes is a passive technology and does not cause interference with existing systems.

Organizations looking to evaluate drone detection technology should know what they are getting into when assessing how a system works. It’s important to know which features and capabilities have room for improvement and require additional technology to see the big picture.

The AeroScope system does have issues detecting older model drones manufactured before 2014. This is due to the one way transmission system in the older drones. Both Phantom 1 and 2 and few other models cannot be detected by Aeroscope.

Between the three systems, Ocusync is the newest and offers the farthest range. Wi-Fi has the weakest range, which significantly affects how far the drone can travel from the receiver. OcuSync drones are easier to detect in noisy environments due to the strength of their transmission capabilities.

Drone ID can be changed or removed

Spoofing MAC addresses, serial numbers, and unique identifiers is possible with all drones. You can change your drone MAC address similar to what you can do to your laptop using open source products that require programming knowledge for free or you can pay a small fee to run a software script. While this is an issue, it is not a AeroScope weakness; the system is doing its job and detecting what the drone is transmitting. The security issue is in the drone itself, and manufactures should always try to address this risk.

Data hosted and accessible by DJI

If you use AeroScope out of the box, data will be hosted on an AWS server operated by DJI. This may pose a problem for large companies, infrastructure and Airports but there is a solution. DJI offers a web API to developers that are interested in securing the data on a private onsite or cloud server. AirGuard by 911 Security integrates data from AeroScope through the API and stores all data on a U.S. government approved AWS server to ensure data safety, privacy, and redundancy.

Real-world example: In one demo, we saw first hand how surrounding noise interference affected detection. The weaker transmission signals from the Lightbridge and Wi-Fi model drones can make it more difficult to detect in environments with RF interference. During the demo, we noticed that the LIghtbridge signal didn’t reach as far as the stated specs. Lightbridge has weaker transmission and can be harder to detect in environments with RF interference.

UI is Not Easy to Use

One of the biggest issues with AeroScope is its user interface (UI). The UI is difficult for end-users to use and navigate. While the UI does offer extensive mapping options and detailed flight logs, users will need a little training to navigate and decipher through the important data.

Users may find it hard to get any useful insights from Aeroscope analytics. While the system does give you basic data, the system doesn’t drill down to give users a more detailed analysis of what is happening in your airspace.

This system really shines when it’s used in conjunction with additional layers of security. DJI offers the ability to integrate Aeroscope with other systems using an API. Our 911 Security Team uses it as the first layer of defense in our AirGuard solution. By incorporating our own UI, AirGuard picks up where AeroScope falls behind. AirGuard provides a more user-friendly interface coupled with actionable insights for your security team to gain a better awareness of your airspace. By incorporating multiple layers of detection, AirGuard detects a broader range of drones brands/models with greater precision and accuracy.

Taking a layered approach allows companies to have a more sophisticated solution and gives organizations better protection and coverage. We recommend a multi-layered solution for environments where a large amount of High-Frequency radio traffic is present. AirGuard uses three hardware technology layers - Aeroscope RF Sensor, Other 3rd Party RF Sensors and Fortem High-Resolution Radar.  In addition to these three layers, AirGuard integrates with Automatic dependent surveillance—broadcast (ADS–B) technology and the Low Altitude Authorization and Notification Capability (LAANC) database to provide a complete risk assessment of all drone threats. Airplanes are equipped with ADS-B technology to determine its position via satellite navigation and periodically broadcasts it, enabling it to be tracked. LAANC provides drone pilots with access to controlled airspace near airports through almost real-time processing of airspace authorizations below approved altitudes in controlled airspace. AirGuard is fully compliant with the FAA and FCC.

AirGuard integrates with electronic drone detection technologies like Radio Frequency (RF) sensors and high-resolution drone radars to detect drones and pilot locations providing security personnel with critical information like drone ID, make/model, payload capacity, and real-time GPS location for both the drone and pilot. AirGuard allows security personnel to manage their airspace in one centralized, easy to use interface. AirGuard users can customize their system for different environments, layouts, and security needs.

To know if AirGuard is a good solution for your security team, contact us and a Airspace Security expert will reach out to you.

AeroScope has been successfully deployed and used near airports, stadiums, and private companies to detect and mitigate unwanted drones. Even though Aeroscope doesn’t offer 100% protection, it can be layered with other solutions such as AirGuard to provide near 100% coverage. AeroScope does implement many useful features and benefits to users. Luckily, where the system falls short, solutions like AirGuard can integrate with AeroScope and extend a more complete security package to end-users.