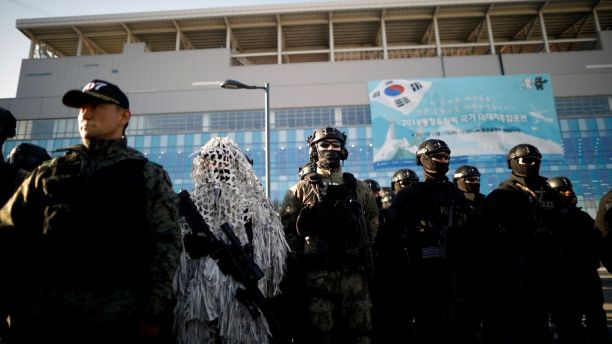 South Korea prepares for drone attack ahead of 2018 Winter Olympics

Countdown to the 2018 Winter Olympics has begun, with less than two months until all eyes are upon the world's largest sporting event. The opening ceremony will take place Feb. 9 at the Pyeongchang Olympic Stadium in South Korea. South Korean forces conducted simulated drills to prepare and practice for possible terrorist attack scenarios.

More than 400 security and emergency personnel participated in the drills. During the simulated drills, security forces shot down a  drone armed with a bomb that was flying toward a bus transporting athletes. Other scenarios included a hostage situation, a vehicle ramming a stadium, and removing a chemical bomb.

According to Reuters, the South Korean Defense Ministry will deploy around 5,000 armed forces personnel to ensure the Games’ security. Pyeongchang’s organizing committee has also hired a private cyber security company to guard against a hacking attack from North Korea. Security at Pyeongchang Olympic Stadium, located 50 miles from the demilitarized zone that separates North and South Korea, will need to be at the highest level conceivable during the Olympic Games.

It is no surprise that South Korean forces are preparing for a drone related worst-case scenario. In November 2017, our own Department of Homeland Security issued an updated terror bulletin highlighting the threat of weaponized drones. Security personnel is beginning to view drones as legitimate threats and acknowledge the importance of drone detection at sporting and other public events.