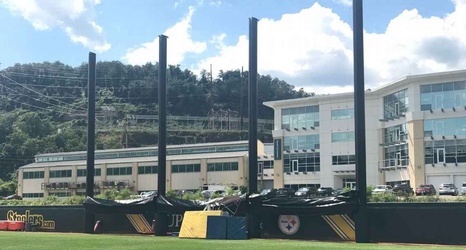 Did the Steelers build wall around practice field to stop spying drones?

The Pittsburgh Steelers are serious about keeping prying eyes away from their football practice sessions by building a giant wall structure to cover one of their fields. Four black pillars about two stories high now face an adjacent office building on the field’s south side. During practice sessions, the team can raise an attached giant black tarp.

Mike Tomlin was asked about the 60-foot wall outside the Steelers practice facility. “This is interesting times, drones and so forth.” pic.twitter.com/e3lc3aYjDc

During his news conference, Coach Mike Tomlin addressed the sudden privacy quest playfully. "I'll leave that somewhat mystical for you guys to hypothesize about the origins of that and its use, and at some point we'll address it the right way," said a smiling Tomlin. Tomlin went on to say, "You know how it is man. This is interesting times, drones and so forth. We'll do what we got to prepare and be ready to play -- play on a level, fair, competitive playing field."

Using drones to spy on NFL practices isn’t as far-fetched as it might sound. In 2017, Security caught someone flying a drone above the Falcons' practice before Super Bowl LI. ESPN reports that Steelers tight end Jesse James said he once saw a drone over the river during a practice, which he found "kind of sneaky" but had no idea whether other NFL teams were involved.