The havoc caused by two drones seen flying over the runway at London’s Gatwick airport last month may end up costing the airport and airlines tens of millions of pounds.

Airport operations at Gatwick were brought to a standstill at the peak of holiday travel when a pair of drones were seen 9 p.m. on the 19th of December flying within the airport perimeter. Authorities closed the airport shortly after the initial sighting as police and military scrambled to investigate. Continued drone sightings – more than 50 according to some reports – kept Gatwick closed for 36 hours, stranding more than 120,000-holiday travelers. Approximately 1000 flights were canceled over the three-day ordeal. The airport finally reopened the morning of the 21st although the perpetrators of the chaos were never found.

According to a spokesman for Gatwick Airport, early estimates for the cost of the three-day closure is expected to be at least £20 million for the airlines and the airport, the Evening Standard reported. That figure is based on data from similar disruptions on similar dates.

Gatwick has yet to release an official tally of lost revenue, but it is estimated to be over a million dollars. Global Infrastructure Partners (GIP), Gatwick parent company, makes about £1.1m per day from the travelers that arrive and depart from Gatwick’s gates.

“They probably would have retained maybe 50% or 60% of those (daily) revenues,” John Grant, director of the consulting firm JG Aviation Associates told Yahoo Finance UK. That is a loss of around £1.5 million from travelers canceling their plans or rescheduling flights through a different airport. Grant estimates that businesses like restaurants, stores, and parking lots at the airport stand to lose more than a million pounds as well.

For British Airways, EasyJet, and Norwegian, the three major carriers operating out of Gatwick, the financial consequences of the drone debacle will be even higher. In their 2018 Financial Report released last week, EasyJet, the largest carrier at Gatwick, reported a loss in revenue totaling £15 million due to December’s incident – £10 million in “customer welfare costs,” and £5 million in cancellations. The budget airline carrier serves 40% of the total passengers at Gatwick and says that the December’s closure affected 82,000 of their customers over 400 flights. 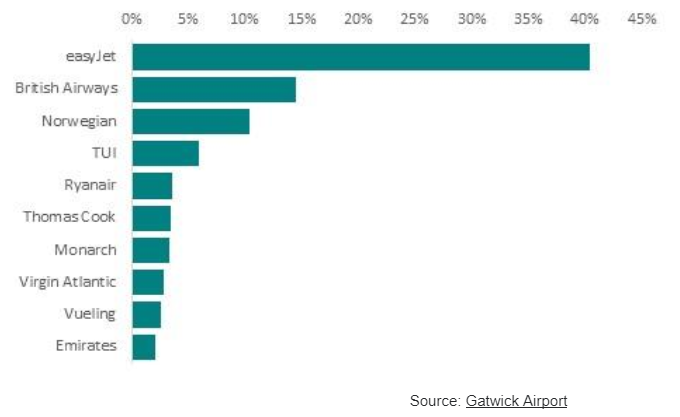 Norwegian which serves 10% of the passengers at Gatwick and British Airways, 15%, have yet to report their losses but based on EasyJet’s data it is estimated to be between £3.5 and £5.5 million.

Beyond the financial losses faced by the airport, businesses, and airlines the economic loss born by the traveler is significant. According to a 2014 study conducted by the UK Airport Commission, an hour delay cost the leisure traveler about £6.60. A businesses travelers time was worth £49 per hour. Considering about 15% of passengers at Gatwick are flying for business, the loss can be calculated to around  £1.8 million to the travelers whose plans were disrupted by the closure.

It will take some time before an accurate number for the total losses caused by the drone nightmare at Gatwick can be settled upon, but it could end up costing well more than the £20 million initially estimated by airport authorities. That is without factoring in the overall economic impact of the affected travelers.

Authorities at Gatwick and Heathrow have announced they will deploy military-grade anti-drone equipment to prevent future disturbances by UAS’s, but it is clear that the industry still has far to go to secure their airports. Only two days after announcing its plan to beef up security and less than three weeks after the Gatwick nightmare, London’s other major airport, Heathrow, was forced to suspend operations for one hour when a drone was spotted illegally flying within the airport’s vicinity. The closure of Heathrow, the busiest airport in Europe, is expected to cost the airport and airlines hundreds of thousands of pounds in revenue.

December’s incident at Gatwick is thought to be one of the most disruptive and expensive of its kind yet – a rude wake-up call for airlines and airports to the vulnerabilities exposed by new technologies. What the airport industry can learn from the debacle and how that knowledge can be used to prevent further disruptions is ultimately yet to be seen. One thing is sure; it will be a costly lesson.