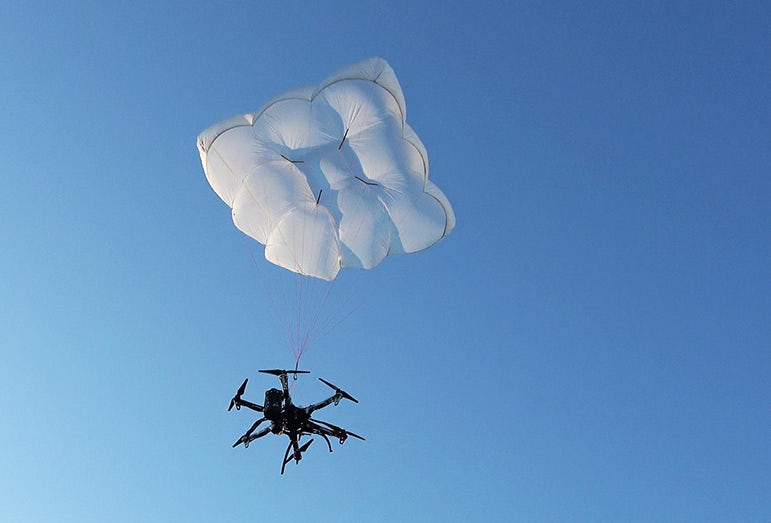 With the rise of commercial and recreational drone use, we can expect to see more drones flying above us soon. The increase in drones in the skies comes with more significant risks of accidents and malfunctions. We have seen incidents this year of smaller hobby drones injuring bystanders - a woman in Salt Lake City, a young boy in Iowa, and a lady visiting Las Vegas.

What happens when a larger drone malfunctions and falls from the sky? A heftier drone such as the DJI Matrice 600, can cause serious injury and be very quite costly to replace. An Austrian company, Drone Rescue, has introduced a new parachute system to add a layer of protection in case of an emergency. They unveiled their products this week during the Intergeo 2018 conference in Frankfurt, Germany. The company offers three models, the DRS-5, the DRS-10, and the DRS-M600.

The parachute safety system works autonomously and independent from the drone and flight controller. The system has sensors that can detect a malfunction, loss of signal, or crash. As soon as the parachute system detects trouble, it will deploy the parachute electronically within milliseconds. After which the drone will float down safely without injuring people and damaging the drone.

The system also has a black box that records all flight data and movements, such as GPS location, altitude, and acceleration. This data can be useful to see what when wrong and for insurance claims.

Drone rescue is expecting to ship the first parachute modules to customers later this year. It will be interesting how the FAA plans to deal with commercial drones operating over crowds and what safety standards will be put in place. The parachute system seems like a promising new safety measure for drones operating over people.