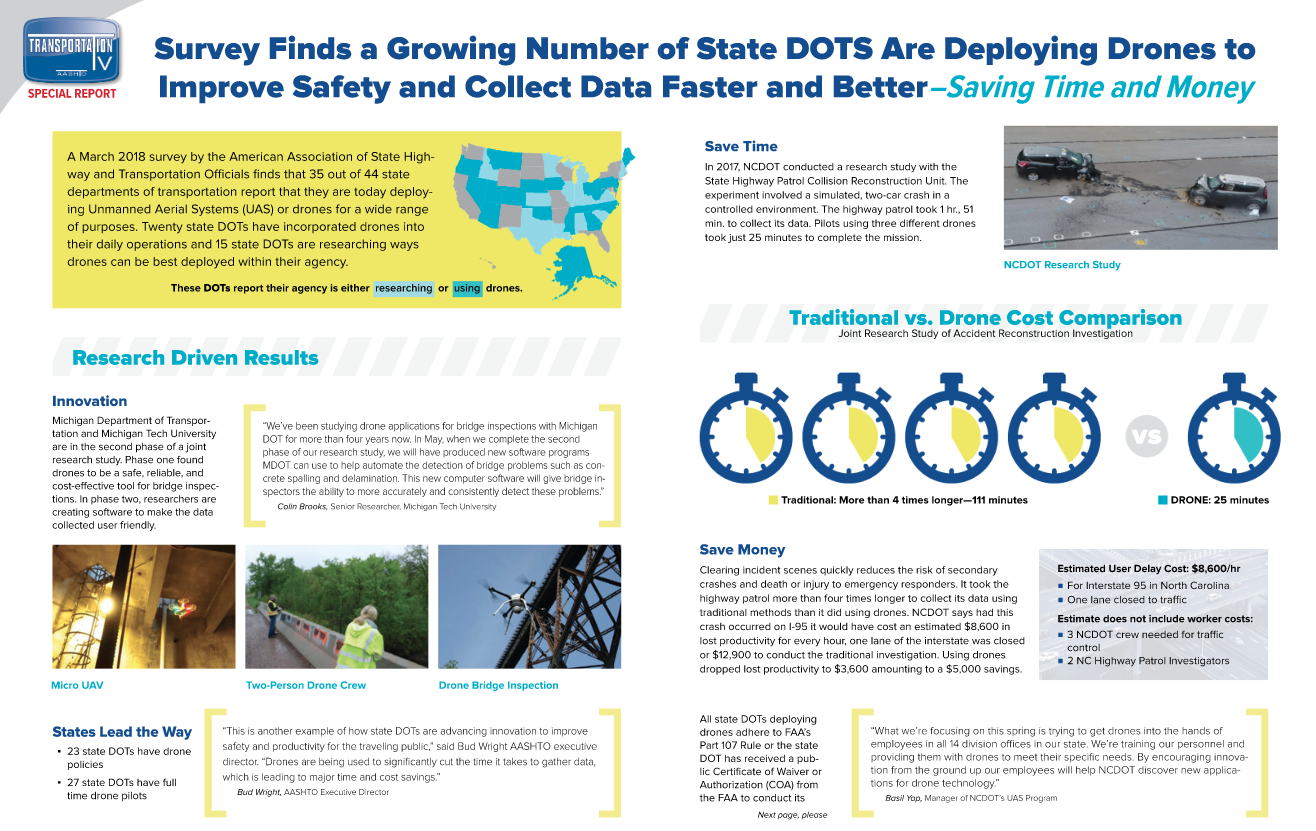 Outside of recreation and entertainment, drones have many beneficial applications and uses. In industrial sectors, UAVs are being deployed to inspect hazardous work sites, while on a commercial level, businesses are utilizing drones for aerial photography and experimenting with drone delivery.

In the US, various state Department of Transportation (DOT) groups are leveraging UAVs for surveillance, real-time monitoring, and data gathering.

A report released by the American Association of State Highway and Transportation Officials (AASHTO) suggests the practice has become increasingly widespread. AASHTO found that 20 state DOTs are already using drones on a daily basis. The 15 groups are in the initial testing and research phase.

What are state patrollers and local law enforcement using drones for?

AASHTO surveyed the DOTs, and these are the top responses:

"This is another example of how state DOTs are advancing innovation to improve safety and productivity for the traveling public," said Bud Wright AASHTO Executive Director. "Drones are being used to significantly cut the time it takes to gather data, which is leading to major time and cost savings."

Drone Adoption on the Rise

North Carolina Department of Transportation (NCDOT) was the first state DOT to adopt drone technology for official use. According to a 2017 study released by the group, the compact aircrafts can help state DOTs save time and money on emergencies situations, such as highway collisions.

During the study, officials compared a response to a stimulated crash on a busy roadway. The first group to respond was the highway patrol Collision Reconstruction Unit, which took two hours to assess the situation. On the other hand, local drone pilots only took 25 minutes to gather the same data, using three UAVs.

From a cost perspective, the traditional DOT emergency response team spent $12,900 on the stimulated investigation. By comparison, the experimental drone team spent $3,600 on the mission.

More DOTs have started to adopt drones or consider drones for their department. It is easy to see the appeal, drones allow for safer, faster, better data collection.