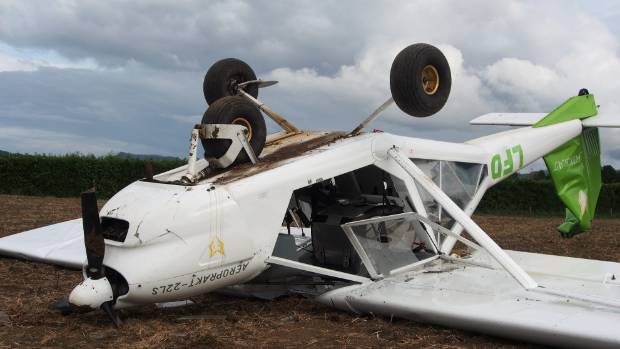 Yesterday New Zealand news outlets reported that a drone may have caused a small airplane to crash. Veteran broadcaster Rod Vaughan says a drone might have collided with the plane he was flying moments before he was forced to make a terrifying crash landing near Waihi.

Mr. Vaughan and his son were on a recreational flight over the Western Bay on Wednesday afternoon, using a small plane belonging to the Hauraki Aviation Club.

While the plane was in flight the windscreen "exploded" and a rush of air filled the cockpit, "The wind coming through was so forceful that it blew my headset into the back of the plane, so I had no communications."

The force of the impact and pressure of the wind, dislodged the two doors, forcing Mr. Vaughan to make an emergency crash landing. The small plane landed hard in a field south of Waihi, clipping a hedge and tipping over after impact. Both passengers were left hanging upside down, still strapped into their harnesses.

After leaving the plane, Mr. Vaughan and his son were taken to Tauranga Hospital and treated for contusions and a large head gash.

Neither man saw what shattered the windscreen, but Mr. Vaughan told reporters that the "most probable explanation" is that it was a drone. Vaughan said there had been a lot of drone activity in the area and members of the Hauraki Aviation Club had expressed concern about possible collisions with aircraft.

The Civil Aviation Authority, which is much like the United States’ FAA, is investigating the crash.

This news comes just days after drone nearly hits an Air New Zealand plane while attempting to land. On Sunday afternoon a drone had a close encounter with an airliner approaching Auckland Airport which put the safety of 278 customers and crew at risk.

Pilots operating Air New Zealand flight NZ92 from Haneda, Tokyo encountered a drone estimated to be just five 16 feet away from the Boeing 777-200 aircraft during its descent into Auckland.

The airline said it was the second example of reckless drone use this month, after an Air New Zealand pilot reported the presence of a drone within controlled airspace on March 6 at Auckland Airport. That incident prompted the airport to halt all flights for 30 minutes.

Near collisions between drones and airplanes, helicopters are becoming more frequent across the globe. In the U.K., drone-airplane near-misses have tripled in two years. Recently in the U.S., a drone almost collided with a Coast Guard helicopter during a training exercise. Governments realize they now have a problem, the rise of drones happened before regulators took action. Developed nations are struggling to create regulations that keep the public safe and at the same time not impede commercial drone use.