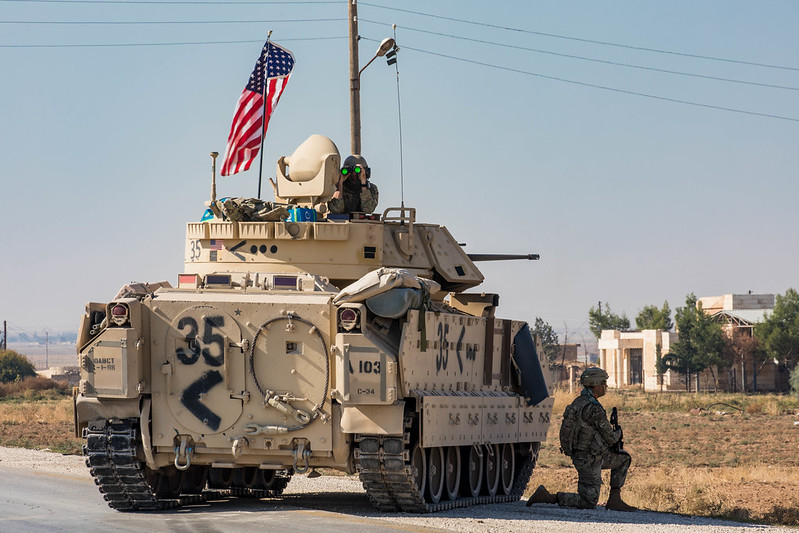 U.S. forces protecting oil and gas fields in NE Syria have recently come under attack from small drones dropping bomb-like munitions. So far, we don't know who is responsible for the attacks, but they are the latest examples of a steadily growing threat to oil and gas infrastructures.

NPR's Tom Bowman is in Syria and was the first to report on this incident. He gave a very detailed disclosure, which he described as "a multiday attack on two of the oil fields" that U.S. forces are presently guarding in Syria. This is the first attack on American troops since the U.S. mission began in October 2019 to protect the oil fields.

Bowman did not specify the exact locations of the attacks, or how many of them there were in total. He did say that members of the "West Virginia National Guard" had been on the scene of one of the incidents.

According to Bowman, drones of an unspecified type "carrying a mortar [bomb]," attacked the West Virginian guardsmen on Mar. 4. More unmanned aerial vehicles conducted similar attacks two days later, both in the morning and the evening.

In the NPR interview, Sergeant 1st Class Mitch Morgan (ph) of the West Virginia National Guard recalled getting a "REDCON-1 status. We were out in 2 minutes. We came out this way. As we were going out, they was raining mortars in on top of us."

SGT First Class Mitch Morgan of the West Virginia National Guard inspects damage from an armed drone attack an at oil field in NE Syria. Narrowly missed him. Army investigators are trying to figure where it came from. Suspect Syrian gov militias. A new threat to US troops. pic.twitter.com/WoE7VxORbX

According to reports, the munitions left prominent impact craters and sprayed at least one U.S. military truck, as well as oil tanks at the site in Syria, with shrapnel. "An interesting thing about these mortars is that some of them, we're told by Army investigators, were made with 3D printers, which means that obviously, someone pretty sophisticated put together these mortars, perhaps a nation-state," Bowman said on-air on Mar. 6.

The descriptions of the latest attacks are similar to the types of drones, and munitions ISIS and other terrorist groups have used in Syria and Iraq. The U.S. military has been testing laser technology to zap drones and for missile defense. The U.S. Army is leading a high-level Pentagon-directed C-UAS effort to assess the different C-UAS systems already in use. Counter drone technology will have to become a standard on the battlefield to fight the growing threat of drones to U.S. troops overseas.