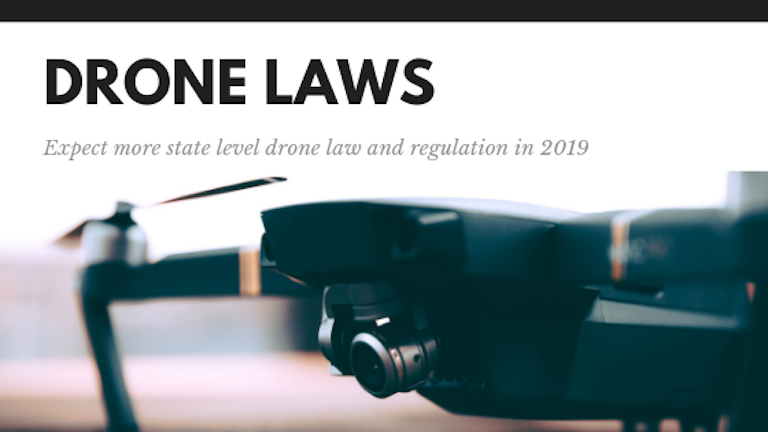 2018 proved to be an eventful year for unmanned aircraft and the drone industry, from maiden FAA IPP drone flights to the first assassination attempt by drone to the FAA Reauthorization Act to the Gatwick airport shutdown.

In the wake of two international UAS incidents, the possible collision between a drone and Aeromexico Boeing 737 jetliner and the Gatwick airport closure, drones and safety are a top-of-mind priority as we head into 2019.

As the FAA Reauthorization Act will help outline and plan safe UAS integration in a national capacity, states and local authorities are left to deal with drone issues on their own. In July 2018, the FAA released a statement clarifying federal and state drone regulations. While the FAA remains the only authority that controls the national airspace, states can address certain legal aspects such as zoning, privacy, and law enforcement operations.

A few of the proposed legislation and upcoming drone law changes for 2019 are listed below:

Sen. Darryl Rouson, D-Tampa, introduced SB 132, which would also allow law enforcement to use drones to monitor “large-scale events,” but prohibits them from being armed or “equipped to fire on crowds” with “tear gas canisters, stun gun technology, or any other dangerous or deadly weapon.”

Missouri has two pre-filed bills for 2019 legislative session. Both bills make it unlawful to use a UAS near a correctional facility.

Rep. Mike Henderson sponsored HB 324 that creates the offense of unlawful use of unmanned aircraft near a correctional center. The bill was introduced Dec, 19, 2018.

Sen. Denny Hoskins introduced SB 194 that also seeks to create the offense of unlawful use of unmanned aircraft near a correctional center.

Last year, Gov. Tom Wolf signed Act 78 of 2018 into law. it will become effective later this month on January 12, 2019. The law establishes penalties for using drones to spy on people without their consent or where they have a reasonable expectation of privacy. The law also makes it unlawful to use drones to deliver contraband to prisoners.

Michigan Public Act 444 of 2018 (previously HB 5494) declares drone use as an extension of the person in instances of criminal activity. Illegal activity carried out with the use of a drone, such as dropping contraband, weapons, cell phones or other items onto correctional facility property for inmates, would be treated the same as an individual breaking the law without unmanned aircraft as an aid.

HB 5496, which became Public Act 446 of 2018, aims to expand and centralize available information on a growing industry, tasking the existing Michigan Aeronautics Commission with providing education to various departments, the public, law enforcement and other entities.