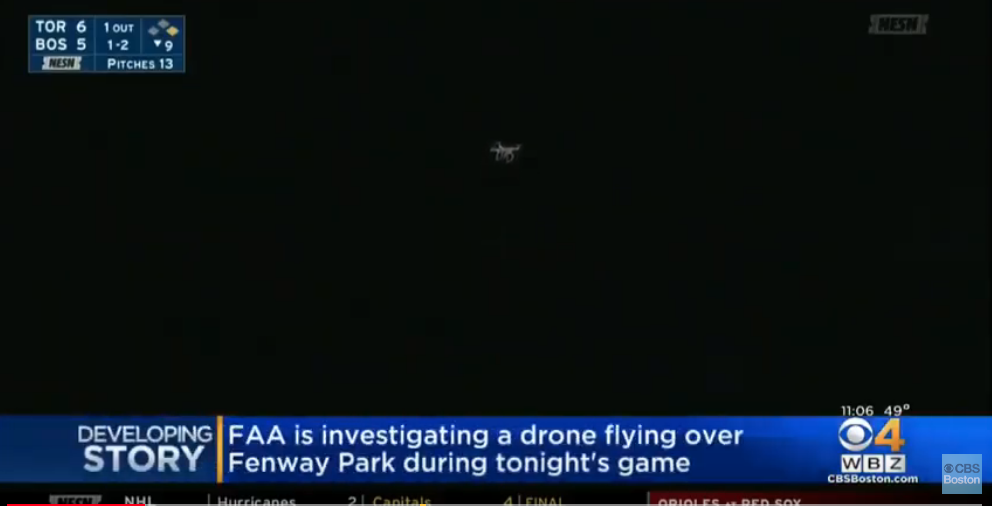 Last night - Thursday, April 11, 2019 during the Red Sox vs. Blue Jays MLB game, a drone illegally flew over Fenway Park. According to Boston Police, the drone was first spotted around 9:30 pm and was last seen around 10:20 pm.

According to CBS Boston, security noticed the drone earlier in the game when it flew over the river near Fenway. It returned and reportedly made two passes of the stadium while the Boston Police Department searched for the pilot outside the park.

The Red Sox said that the drone was not authorized and the team reported the incident to the Boston Police. Both the police and the Federal Aviation Administration’s (FAA) are investigating the incident.

“During the late innings of tonight’s game, a drone was flown above the ballpark by an unidentified individual. The operation of Unmanned Aircraft Systems (UAS) around large stadium events is in violation of FAA regulations and the club has reported the incident to the Boston Police Department for investigation,” the Red Sox said in a statement.

FAA regulations prohibit drones from flying over stadiums during events. Drones are not allowed to be within three miles of the stadium from between one hour before the game to one hour after.

FAA Statement: The FAA is investigating a report that a #drone flew over @fenwaypark during the baseball game last night. Flying drones in/around stadiums is prohibited starting 1hr before & ending 1hr after the scheduled game & prohibited within a radius of 3 nm of the stadium. pic.twitter.com/o6nOGVf8K2

Was the geofence overridden?

The drone in question is an older DJI phantom model drone. DJI spoke out about the incident saying, "DJI is aware that an apparent DJI Phantom drone was spotted over Fenway Park during (Thursday night's) Red Sox game." The company also said they "are trying to learn more about what happened, and stand ready to work with Boston Police and other security agencies to investigate what happened. Whoever flew this drone over the stadium apparently overrode our geofencing system and deliberately violated the FAA temporary flight restriction in place over the game."

Last night at Fenway Park isn’t the first time a drone has disrupted a sporting event or even MLB game.

In May 2017, a drone crashed into spectators at a MLB baseball game. The incident took place at Petco Park during a game between the San Diego Padres and Arizona Diamondbacks when a rogue drone flew into the stands.

In November 2017, a California man used a drone to drops leaflets over crowds at two different NFL stadiums. First he dropped leaflets over Levi’s Stadium in Santa Clara where the San Francisco 49ers were playing the Seattle Seahawks. Then, he fled north to drop leaflets over the Oakland Coliseum during the Raiders game.

This drone incident comes a few days before the city of Boston is gearing up for their famous marathon. The 123rd running of the Boston Marathon is Monday, April 15, 2019.

Police want everyone to remember there is a NO DRONE ZONE over the runners and the spectators. The no-drone zone includes the entire 26.2-mile route snaking through the city and ending at Boylston Street.