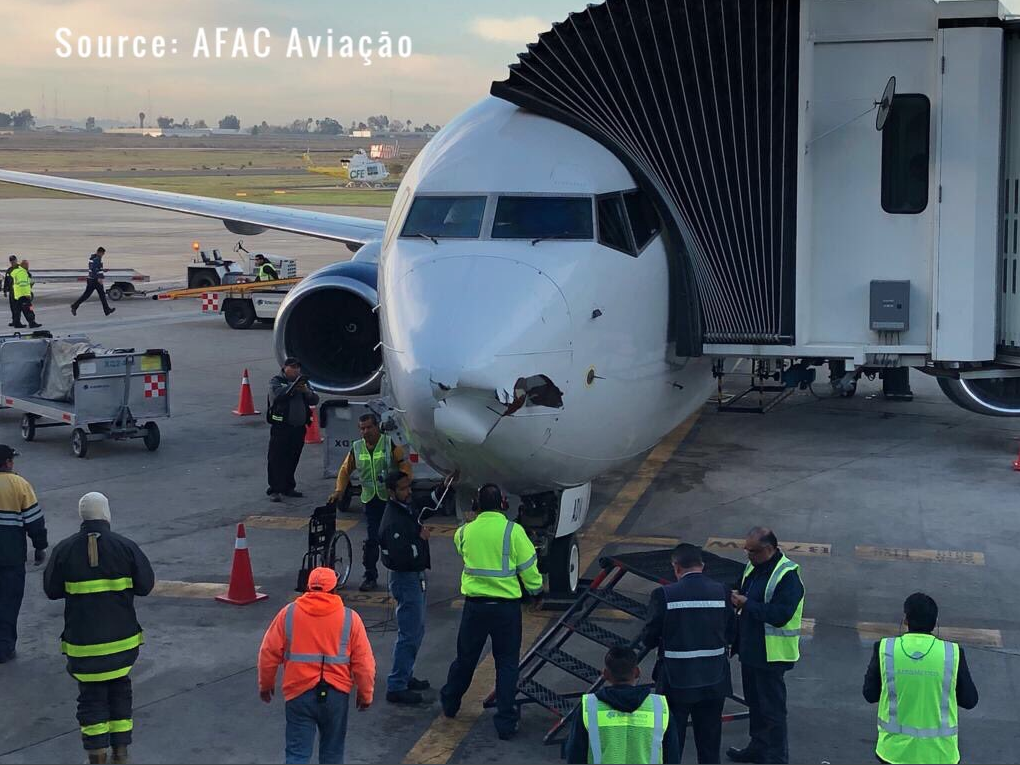 On December 12, 2018, Aeromexico Flight 773 was approaching Tijuana International Airport when an unmanned aircraft system (UAS), or drone, reportedly collided into the nose cone of a Boeing 737 jetliner.

The plane took off from Don Miguel Hidalgo and Costilla International Airport in Guadalajara, Mexico on Wednesday morning in route to Tijuana, Mexico. When the airliner was approaching General Abelardo L. Rodríguez International Airport (TIJ) in Tijuana, the crew reported hearing a “pretty loud bang.” Flight crew asked the control tower to check if the nose was damaged and requested assistance to land the plane. It is believed the plane collided with a drone shortly before landing.

Photos surfaced on social media showing extensive damage to the Boeing airliner’s radome. The radome, or nose cone, is a structural, weatherproof enclosure that protects a plane’s radar antennas. Fortunately, the flight was able to land safely with no reported injuries.

Aeromexico #AM770 from Guadalajara suffered nose cone/radome damage on approach to Tijuana. Local media reporting it collided with a drone. No injuries reported. XA-ADV Boeing 737-800. pic.twitter.com/2WHv8TMyn1

“The exact cause is still being investigated,” Aeromexico said in a statement. it is currently unknown what exactly caused the damage to the jetliner’s radome, the investigation is ongoing and will determine whether a drone, a bird, or material failure damaged the jetliner.

With the dramatic increase in the number of safety reports involving UAS, it is only a matter of time before a drone collides with a passenger airliner. According to the FAA, there have been over 6,000 reports of potentially unsafe use of drones between April 2014 and June 2018.

There have been many reports of potential midair collisions between planes and unmanned aircraft. In the United States, there is only one confirmed drone-related collision that happened when a drone hit a military UH-60 Black Hawk helicopter. The incident occurred near Staten Island, New York in September 2017. The U.S. National Transportation Safety Board investigated and confirmed the midair collision.

The FAA has investigated other incidents involving potential drone interferences with manned aircraft. One such event that caused industry officials to call for tighter regulations involved the video of a drone flying just feet away from an airliner near Las Vegas.

In February 2018, the FAA examined an incident involving a pilot crash-landing his helicopter after trying to evade a drone. The FAA also investigated a possible collision between a drone and Kauai tour helicopter.  Months later the FAA received reports from two Mokulele Airlines pilots detailing near misses with a drone during their approach into the Daniel K. Inouye International Airport. In April 2018, a drone came dangerously close to air traffic at Dallas Love Field and forced a medical helicopter to take evasive action to avoid a collision. The FAA reports receiving over 100 drone sighting a month from pilots and air traffic control.

Drone misuse threatens airport and aircraft safety, potentially endangering lives of passengers and flight crew members. Take-off and landing are critical times for pilots and are when planes would most likely encounter drones. Drone detection delivers the continuous situational awareness of relevant threats and enhances actionable awareness by giving airport security and traffic control the knowledge to know when to ground or reroute flights. Detection systems can also reveal UAS pilot location data which they can turn over to authorities or use to notify the UAS pilot to get their drone out of the way.