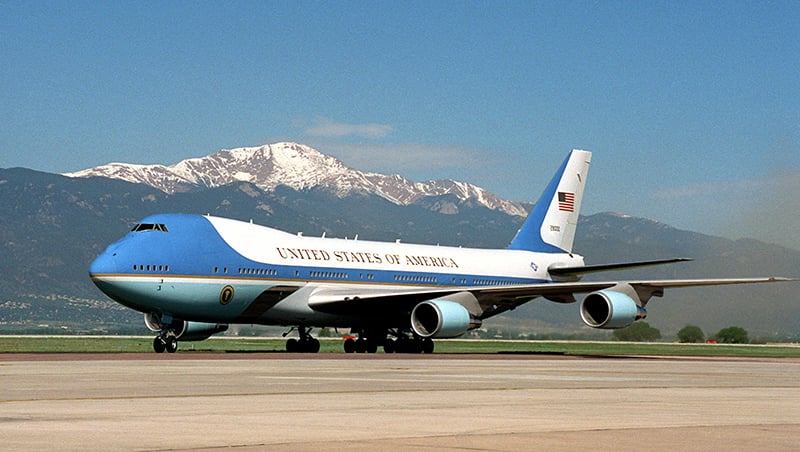 Air Force One nearly hit by small drone amid descent

Air Force One, the Boeing C-32A aircraft that the president Trump was flying on, came into close contact with an unmanned aircraft system (UAS) while making its final approach into Andrews Air Force base on Sunday evening.

The Drive reported the incident after reporters on the plane took to twitter to describe the encounter. AFP's Sebastian Smith had a window seat and saw the drone as the presidential plane was descending.

@realDonaldTrump just landed at Andrews on AF1. Shortly before, while descending,we flew right over a small object, remarkably close to the president’s plane. Resembled a drone though I’m no expert. pic.twitter.com/roDFgpp4XH

The incident was noted by “multiple people” aboard Air Force One, according to Jennifer Jacobs, a senior White House reporter for Bloomberg News.

Multiple people on AF1 saw what appeared to be a drone just below the plane as we were descending toward Joint Base Andrews.

We came very close to hitting it, per @SebastianAFP, who had a window seat. pic.twitter.com/WVbxT9ckG7

Having a drone come so close to the world’s highest-profile and well-equipped commercial aircraft is certainly cause for concern. The danger posed by hobby and other small UAS to aircraft isn't new. In recent years, we have witnessed incidents of drones interfering with firefighting aircraft, grounding passenger planes, and colliding with U.S. Army Black Hawk helicopter and news helicopter.

These drone incidents serve as a reminder of the potential dangers drones pose to manned aircraft. Even a small hobby drone could cause severe damage to life and property. Drone pilots should always steer clear of manned aircraft and follow FAA regulations. Check out the FAA UAS website for guidelines and resources on where to fly your drone.