A wrongful termination lawsuit filed April 18, is shedding light on a serious incident involving the drone manufacturing company, AeroVironment (AVAV). The lawsuit unveils that the CEO of AeroVironment has orchestrated a cover-up of illegal activity. The company is being sued by one of its ex-employees, who claims he and his colleagues were fired for reporting an incident that violated the law. (Case No. BC 702904 Superior Court of California, County of Los Angeles.)

The lawsuit was filed by AVAV’s former chief of top-secret government programs, Mark Anderson, who had worked at the company for a decade. According to allegations in the suit, an employee of AVAV boarded a commercial Delta flight in April of 2015 with an explosive-laden drone in his carry-on bag. The flight was carrying 230 passengers from Salt Lake City to Los Angeles. 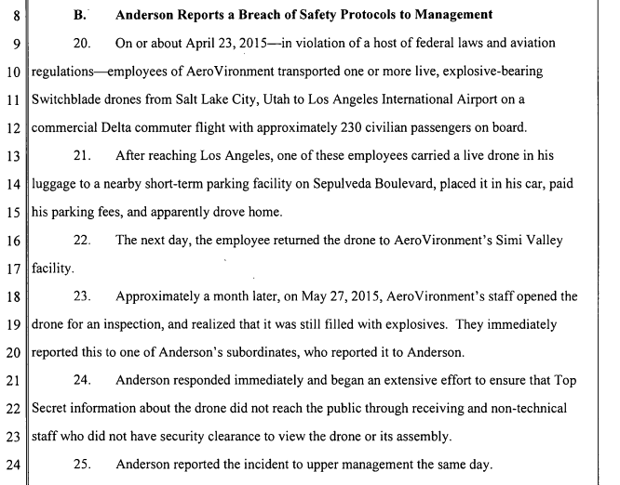 According to lawsuit documents, the employee was traveling with one or more explosive-bearing Switchblade drones. AVUV’s Switchblade drone is an easy to carry, foldable drone intended for battlefield precision strikes. Its warhead has an explosive charge equivalent to a 40mm grenade to destroy light armored vehicles and personnel.

It is unclear how the AVAV employee was able to pass through TSA security with a weaponized drone in his carry-on bag. TSA has an extensive list of items that passengers are prohibited from taking on a flight. Among the banned items are dynamites, fireworks, explosives, and even “realistic replicas of explosives.”

The complaint did not reveal if the employee was aware the drone was live, meaning it had explosives in it. He may have very well been under the impression it was just a shell without explosives. The employee’s identity has not been disclosed. According to documents, the employee carrying the weaponized Switchblade drone resigned in November of 2015, Anderson believes the employee was forced to resign.

The plaintiff, Mark Anderson, who oversaw the company’s top-secret government programs, learned of the incident in May 2015. After reporting the incident to his superiors and the U.S. Department of Defense (DoD), Anderson alleges that he and other colleagues were stripped of their duties and ultimately fired without a severance pay. Anderson is seeking unspecified damages from the company.

The website, Aurelius Value, discovered that at least 56 senior employees and executives have left AVAV since the alleged cover-up, a significant amount of turnover considering the company reports having only 661 employees.

A spokesperson for AeroVironment provided this statement regarding the lawsuit, “AeroVironment believes the complaint contains baseless legal claims that are without merit. The Company will defend itself vigorously once it is served with the complaint, consistent with its ongoing commitment to conducting its business with the highest standards of ethics, safety and integrity.”

Delta and TSA have yet to comment about the incident. These allegations are disturbing on many levels. If the company knew the drone was armed with explosives, they knowingly put the lives of everyone onboard at risk. It also brings up other security concerns. Seriously, how was this employee able to board with explosives in his carry-on luggage? If this guy was able to get through security, someone else can too.