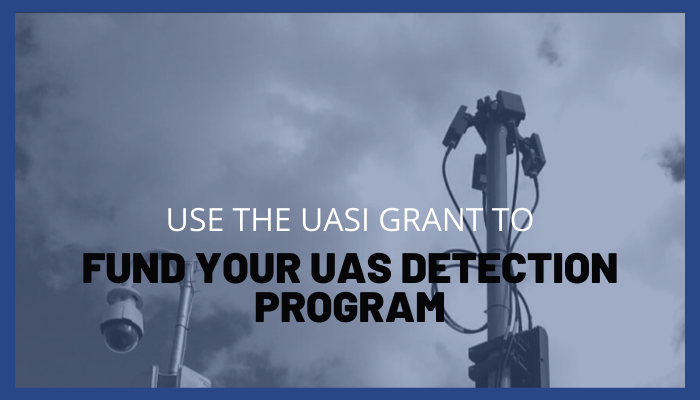 UAS detection technology gives urban environments increased situational awareness by allowing security and city officials to have a complete picture of what’s happening in their airspace. Drone detection provides cities with a technology to further protect their communities.

Many city’s budgets don’t cover additional security tools such as UAS countermeasures. Luckily, there are options for federal grants, such as the Urban Areas Security Initiative (UASI) program.

Getting familiar with the requirements can significantly assist your team in applying for and receiving grant money that can fund critical projects to protect your cities from emerging threats.


This article explores the UASI program and provides insights into important factors such as:

What is the Urban Areas Security Initiative (UASI) program?

The Urban Areas Security Initiative (UASI) Program assists high-threat, high-density Urban Areas efforts to build, sustain, and deliver the capabilities necessary to prevent, prepare for, protect against, and respond to acts of terrorism.

The UASI program is intended to provide financial assistance to address the unique multi-discipline planning, organization, equipment, training, and exercise needs of high-threat, high-density Urban Areas, and to assist these areas in building and sustaining capabilities to prevent, protect against, mitigate, respond to, and recover from threats or acts of terrorism using the Whole Community approach.

In developing applications for UASI, recipients are encouraged to consider national areas identified for improvement including:

Applications addressing these priorities have a higher chance of getting approval. Failing to propose projects that align with these critical areas may result in receiving a reduced grant award.

Eligibility has been determined through an analysis of relative risk of terrorism faced by the 100 most populous Metropolitan Statistical Areas (MSAs) in the United States, in accordance with the Homeland Security Act of 2002, as amended.

Drones are an emerging threat

Urban metro areas are at a greater risk to drone threats than rural areas. Urban centers have high population density, with an abundance of corporations, data centers, sporting events, and government facilities making them an extremely attractive target to lone wolf and nation state terrorists.

Drones can easily bypass traditional security barriers and can be hard to detect and track with the naked eye. Making them a perfect tool for criminals and bad actors. Drones can also cause harm to bystanders and other aircraft due to pilot negligence. With the number of drones increasing, so does the potential for threats.

Drones can be retrofitted with release mechanisms to remotely drop biological, chemical, or explosive weapons on soft targets such as events, festivals, or sporting arenas.

In November 2017, Tracy Mapes showed us how easy it was to use a drone to drop a payload into stadiums filled with fans. He managed to use his drone to drop leaflets over 2 NFL stadiums during live football games.

In May 2019, Mapes dropped flyers near the Golden 1 Center, where hundreds of fans were waiting to attend an Ariana Grande concert. Leaflets were also dropped over Sacramento State Farm-to-Fork "Bites on the Bridge" annual fundraiser dinner.

Luckily, Mapes was only dropping propaganda leaflets. However, he did show us how easy it can be to use a drone to drop material on crowds.

Spy on government operations and individuals

While speaking at the AUVSI Xponential conference Joe Mazel, FBI head of operational technology law unit, revealed that criminals used drones to surveil and video FBI agent’s field positions in a hostage raid. The criminals streamed the drone footage to other members of the gang. The gang also used a swarm of drones to distract and disorient the FBI agents.

Mazel also told the audience that counter surveillance of law enforcement agents is the fastest-growing way that organized criminals are using drones.

Drones for cyber attacks and espionage

Cybersecurity threats are advancing due to drones being equipped with more advanced hacking software, and their ability to covertly infiltrate sensitive airspace. Corporations, data centers, research and development labs, fusion centers basically anywhere with sensitive information or important meetings could be a potential target for hackers or spies.

Drones threats to businesses and organizations:

As the number of drones entering the national airspace increases, the potential for collisions between drones and manned aircraft rises too. In 2018, the FAA investigated a close call involving a drone flying above a commercial airliner near Las Vegas. A routine coast guard training exercise almost turned into a disaster when a drone nearly collided with the coast guard helicopter. In 2017, A U.S. Army Black Hawk helicopter was not as lucky when a drone struck it near Hoffman Island, New York. These drone incidents serve as a reminder of the potential dangers drones pose to manned aircraft in urban areas.

For example, if a drone is detected flying over the Dallas County Courthouse in a suspicious manner and is flagged. Then, the same drone is flown over another city's courthouse. The drone detection platform will analyze the connection with the appropriate alert level. Security teams can see all flights made by that specific drone and analyze flight patterns.

Many fusion centers in the United States are already incorporating drone detection in their surveillance tools with great success. Houston, Texas is one urban area that is using 911 Security's AirGuard drone detection software platform to increase airspace awareness and security with actionable data insights.

If your organization is interested in exploring drone detection technology to mitigate emerging threats, then 911 Security is here to help. Our dedicated team can assist you with your UASI Project Investment Justification (IJ) to ensure you meet the April deadline.