Quick recap: In the first post, we discussed Issue #1: Drone threats and risks to your stadium. We detailed how understanding the scope of the risks and consequences will help you develop realistic safety strategies. Now let’s look further at the economic impacts specific to stadiums so you can better understand the priority of risk.

The prevalence of both recreational and commercial drones today presents new security risks at any big public gathering, and nothing draws a crowd quite like professional sporting events. Open-air stadiums that host big franchise games can sometimes have more than 100,000 people in attendance and are particularly at risk to drones flying over them or into them.

An example of just such an incident occurred during the May 2017 MLB game at Petco Park between the Padres and Diamondbacks. At the top of the seventh inning, a drone made a crash landing in the stands behind home base just as Clayton Richard faced Chris Owings at-bat.

Luckily, the drone struck an empty seat between fans and no one was hurt, but what if it had been worse? What if the UAV had hit some fans or crashed onto the field injuring players?  What if it had occurred during a big event like the Super Bowl or the World Series?

These are essential questions for stakeholders – the cities who own the stadiums, sports teams and leagues, and the television networks that air the games. A drone incident during a big game could have massive financial consequences.

Consider the scenario in which an NFL game is canceled because a drone has flown onto the field or crashed into the stands injuring fans. Imagine that there is suspicion of terrorist activity and the stadium is evacuated, the game canceled. Just what would the financial consequences be of such an incident?

Sports and entertainment events are not only an essential part of culture and pride, but they are also valuable to our economy. Sporting events generate enormous revenue each year. According to PriceWaterhouseCoopers (PwC) 2018 Sports Outlook, the sports market in North America will grow at a compound annual rate of 3 percent from $69.1 billion in 2017 to $80.3 billion in 2022  - across four key segments: media rights, gate revenues, sponsorship, and merchandising. 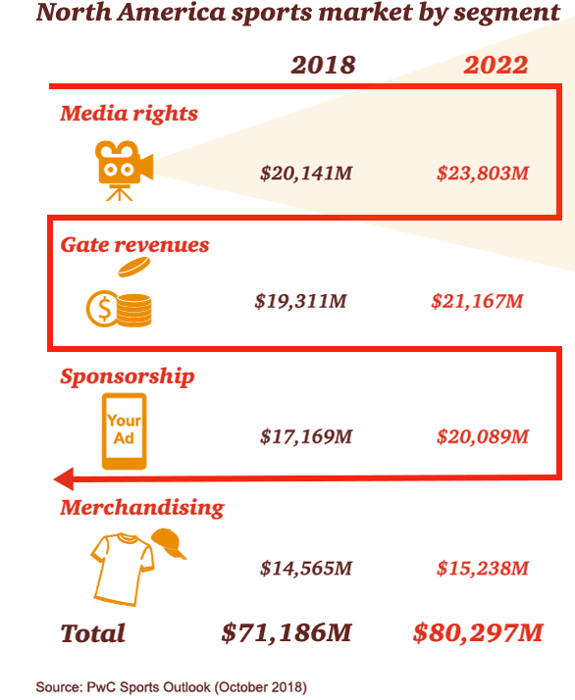 According to some models, a person attending a regular season NFL game spends anywhere from $252 to $483, depending on the city, for tickets, food, drinks, and parking. So, for any regular season NFL game, there are anywhere from $17 to $30 million in revenue that’s at stake directly from the fans attending the game. Were it the Super Bowl, that number could be over $400 million.

The loss of that fan revenue would in part fall upon the stadium and sports team that profit from ticket and concession sales. It would also fall upon third-party vendors and ultimately on the fans themselves who may never get their tickets reimbursed.

It would be worse if a player or fan were injured resulting in costly lawsuits. If the stadium’s lack of security against a drone incident were considered negligence, liability could fall upon the stadium owners to compensate injured parties. Such an event could lead to a loss of credibility. If the stadium was considered unsafe or unprotected, it could result in a drop in ticket sales, or a team may even decide to leave a city and take their franchise elsewhere.

However, as bad as a drone incident during a football game would be for stadium owners, the sports teams, and their fans, the real money in professional sports is in media rights and advertising. According to PwC, media rights officially became the industry’s most valuable segment in 2017. For major sports networks, like FOX, NBC, and CBS a canceled game would leave a big gap in programming and could cost them millions in the loss of ad revenue.

A 30-second spot on NBC’s Sunday night football franchise, the most expensive time slot, costs an average of $728,434. That means the average Sunday Night NFL game, running about 63 minutes of commercials, generates close to $46 million in advertising. So for the networks even a ten-minute loss of signal caused by a drone incident could cost millions.

It may sound like science fiction, but the likelihood of a drone flying into a crowded stadium is perhaps closer than we are comfortable admitting. There are well over a million drones registered through the FAA, and that number grows every day.

For now, we can only speculate the actual cost of a drone disrupting or canceling a major sporting event but depending on where and when it could easily run into the hundreds of millions for the networks, stadiums, sports teams and ultimately, the fans.

Up next: We will discuss Issue #3: SOPs and policies to help your team prepare for drone-related security issues.