FAA instructions how to deal with unauthorized drones

Unmanned Aircraft Systems (UAS), commonly referred to as drones by the media and public at large, are becoming more common in the skies above the U.S. and around the world. While initial awareness of this technology concentrated mostly on U.S. Department of Defense (DoD) operations in various war theaters, public concerns for the use of UAS has steadily increased over the past decade. Today, the public’s concerns have sharply focused on domestic UAS operations by the government, including federal, state and local law enforcement agencies around the country.

At the same time, the agency responsible for ensuring the safety of U.S. air transportation, the Federal Aviation Admin­istration (FAA), has become increasingly concerned about the rapid proliferation of small UAS throughout most communi­ties. There is evidence of a significant increase in civilian use of small, inexpensive UAS by people and businesses that traditionally did not comply with FAA requirements.

The FAA has recently published new regulations permitting the operation of civil small UAS (sUAS). The new regula­tions do not require an airworthiness certification for the UAS but do require the operator to have a remote pilot certifi­cate issued by the FAA. Also, UAS technologies need to be registered with the FAA and display the registration number (N-number) on the aircraft. Despite these new rules, there is an escalating threat of unauthorized or “illegal” UAS flights that continue to pique the FAA and federal, state and local law enforcement agencies’ attention and concerns for public safety, in the air as well as on the ground. This rapid prolifera­tion of small UAS technologies has even escalated concerns about our national security. This white paper is intended to offer high-level guidance to law enforcement agencies on how to assess UAS operations within their jurisdictions and suggest actions to interdict and mitigate unauthorized, illegal or risky operations.

Clearly, RC flying has evolved well beyond the mere enjoyment of a hobby for recreational flying. This increasing consumer market for small UAS presents a number of public safety and national security concerns, some of which are presented below Risk of Physical Injury. A UAS can launch and land in a confined area, such as a parking lot, at an outdoor con­cert or in public parks. In August 2013, a civilian operated UAS crashed into the spectator stands at Virginia Motor-sports Park, injuring four to five spectators.’ In December 2014, TGI Friday launched a promotion called “Mobile Mistletoe” to fly mistletoe over couples at the restaurant. The UAS lost control and clipped a photographer in the nose, cutting the tip of her nose and chin.

These are only a few examples that LEAs may confront in the near future as this technology and its availability increase throughout the country. Federal, state and local law enforcement agencies must begin to consider; develop and implement appropriate strategies to address these growing concerns for public safety. State legislatures are already focusing atten­tion on these systems with reference to privacy and security concerns.

The following is intended to provide an overview of possible state laws that may assist law enforcement in addressing un­authorized or unlawful UAS operations. As a general matter, a number of states have already passed laws directly related to UAS operations. Many of these statutes may even impact or influence LEAs’ decisions to acquire this technology as an added tool for public safety. Agencies are encouraged research and discover any state laws or local ordinances that may directly address the use of UAS. Though the language of the laws varies, they clearly indicate a concern about the use of UAS and how they will affect the public, with privacy being chief among those concerns. A number of these laws focus on government actors instead of civilians. Therefore, it is im­portant to determine who the law applies to when reviewing a specific UAS law within a jurisdiction.

While the public expresses concerns about LEAs deploying UAS technology as a means to “spy” on them, violating their Fourth Amendment rights, the real and present danger exists not from the LEAs but from fellow neighbors and citizens. Some people may be inclined to capture video or still photos of others using a UAS, essentially peeping into the privacy of another in order to capture images or video of others in an unlawful way.

In addition to specific UAS legislation, law enforcement may use a number of existing laws to help address illegal orimproper UAS operations. Still, the prosecutor will need to be convinced that the time and effort to prosecute a UAS case under one of these laws is necessary and worthy of exploit.

When it comes to UAS operations, federal, state and local law enforcement agencies already have many techniques and protocols in their enforcement tool box to correctly confront and manage suspected unauthorized or illegal UAS operations.

One of the more important issues for LEAs interdicting un­authorized or illegal UAS operations is LEAs’ familiarity with national airspace restrictions relevant to their enforcement area of responsibility. The FAA frequently publishes flight restrictions to protect various sensitive operations, special security events .g., select law enforcement activity, space flight operations, major sporting events), and presidential movements. All flight operations conducted within these flight restriction areas are typically prohibited and therefore any UAS operation conducted within those restricted areas, without a specific authorization, would be a criminal activ­ity. The most up-to-date list of Temporary Flight Restrictions (TFRs) is available at http://tfr.faa.gov/tfr2/list.html.

If an agency or individual would like to discuss further plan­ning regarding how to confront UAS situations, please contact us at drones@911security.com or call us @ 866-618-2267.

Hope you enjoyed this report. Feel free to request an FAA 16X20 incident reporting poster at no charge that you can share with your department.

Disclaimer: The orginal report was published by the National Institute of Justice (U.S.) 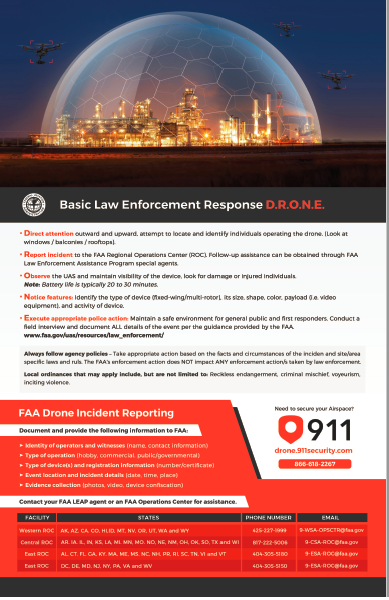