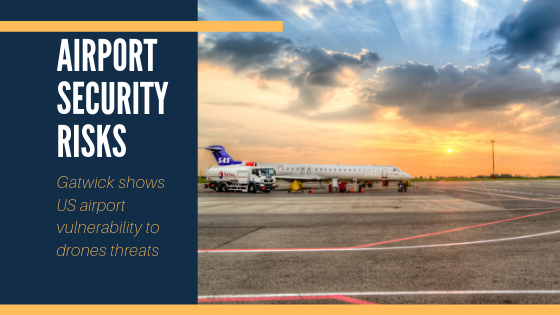 In light of recent drone incidents happening at airports, such as Gatwick, airport security officials in the U.S. are re-examining security procedures and drone mitigation solutions to contend with drone threats. If you weren’t aware of drone threats before, you can’t help but be aware now with all the news coverage of the drone chaos that happened at Gatwick on December 19 - 21, 2018.

My name is Robert Tabbara, CEO of 911 Security, and I want to take this moment to give you deeper insights into the most pressing security topics that frequently come up during meetings with airport officials and others in the aviation industry. I will be examining the top four issues and other questions to can help you and your team evaluate solutions to mitigate drone threats.

In those meetings, the below topics and questions keep coming up in our conversations:

Rather than promote specific products or services, my goal in this blog series is to provide you with a comprehensive approach to answer these questions and address your particular concerns so you can manage this new threat and effectively make our airports safer. Continue along while we jump in and discuss the issues and concerns you and your colleagues are having.

Issue #1 Drone Threat: Could Gatwick happen at my airport?

Gatwick Airport, the second busiest airport in the UK averaging 46 million passengers a year, suspended flights on December 19th through 21st in response to multiple drone sightings and the potential safety risks they caused. The airport informed passengers that it did not know when services would resume due to continued reports of drones spotted flying near the airport. The airport canceled around 1,000 flights and affecting at least 110,000 passengers during a busy holiday travel time.

While this incident has claimed a lot of media attention due to the number of passengers affected and the length of the shutdown, it is not the first drone incident (not even for Gatwick). There have been several well-documented incidents like this that have taken place around the world.

Some of those drone incursions include:

Could Gatwick happen to you?

Each of these incidents posed significant security risks and caused concern for the aviation industry. Drones are not just a problem for airports in the U.K. or elsewhere; they are a security issue that all airports need to face and address. Yes, what happened at Gatwick could happen to you.

What are the risks?

Of course, there are other potential risks associated with drones such as malfunction or operator error causing the drone to crash into people on the ground. As of yet, most drones are not built with safety redundancies such as critical failure systems or back-up batteries.

Motives of attack - Targeted vs Unintentional

It is no surprise that airports and airplanes are attractive targets to terrorists and lone wolf actors. While the level of risk isn’t as high from hobbyist, airports are also appealing to hobbyist wanting to get pictures. Drone threats to airports could originate from targeted sources or unintentional sources.

As UAS move from a niche product to a mainstream device, they have also become quite popular with hostile groups. We have documented cases of state militaries as well as terrorists and other non-state actors deploying drones on the battlefield.

U.S. agencies have repeatedly warned about the threat of weaponized drones, chemical attacks, and the continued targeting of commercial planes. Last year, U.S. officials issued a drone threat warning citing the assassination attempt via drone on Venezuelan President Maduro and ISIS drone usage in the Middle East to carry out attacks and collect intel.

How big a risk are drones at my airport?

Whether Gatwick was your wake-up call or you have been following the headlines highlighting drone incidents near airports for years, you are aware of the risks drone pose to airports. Many airport security officials are now wondering, “how big of a risk is this for my airport?” and “is this happening around me?”

The assessment of probability is simple and can be scored based on the number of drone intrusions happening at your airport.

While the first instinct might be to ask or rely on employees and pilots to report drone sighting and keep records of the events, be aware this method will be extremely inaccurate. Relying solely on human eyes may lead your team to a false sense of security.

The best way to determine the frequency of drone sightings is to monitor drones with drone detection technology. Reputable companies will allow you to try out or rent drone detection equipment for a trial period (60-day or 90-day trial), this will give the most accurate numbers to analyze the actual probability. Accurate probability will help your team evaluate the priority of the risk and how it should fit in your overall security plan.

The determination of consequences can be somewhat speculative. However, the subjectivity can be lessened using data or facts collected from similar events.

For example, what are the potential consequences of a drone flying over your runways? We know it can cause airport operations to come to a halt, which will lead to flight delays, flight reroutes, and financial losses.

The video below shows how a 14-minute shutdown due to a drone flying near Gatwick on July 2, 2017 caused severe disruptions for the airport and knock-on effects for air traffic control.

Understanding the scope of possible risks and consequences will help you develop realistic, safe, and cost-effective strategies for dealing with unauthorized UAS.

Stick around while we jump further into the issues and concerns that you and your colleagues are having, please feel free to comment and give your insights as we try to tackle these issues together.

In our next installment, we will discuss Issue #2: economic impacts of drone incursions at airports and where drone mitigation falls in your list of security priorities.