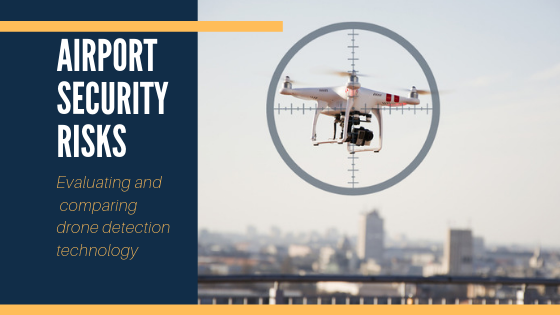 I am Robert Tabbara, CEO of 911 Security - a company that specializes in drone detection technology. After meeting with many in the aviation industry, I wanted to share insights into your top issues about drone threats and drone detection. This blog series is dedicated to answering your airport security concerns concerning drones and drone countermeasures.

Quick recap: In the first article, you examined Issue #1: Drone threats. You weighed Issue #2: economic impacts on airports and airlines in the second article in this series. In the third article, you explored Issue #3: drone policies and safety procedures to help your team better prepare for drone threats, and now you are looking for solutions to mitigate the risks associated with drones.

In this post, we will look at Issue #4: Comparing drone mitigation solutions and examining the limitations of drone detection.

What technologies are available to monitor drones and enforce your policy?

As you are putting a drone security procedure in place together, it is important to research and understand the following:

The FAA defines a UAS “as an aircraft that is operated without the possibility of direct human intervention from within or on the aircraft (Public Law 112-95, Section 331(8)).” Since the FAA classifies UAS as an aircraft, it is illegal to intercept the device using a jammer or any type of brute force.

There are two main electronic technologies available to detect drones:


The above might sound disappointing if you were hoping that I was going to recommend one technology that is the “magic bullet” drone detection technology. Drone detection should be a layered approach that combines various technologies to give a solution that works best for your airport’s environment based on risk assessment per location.

The truth is drones threats are new, drones are hard to detect, and many of these drone detection technologies have emerged within the last 1-4 years, but companies are working hard to improve systems to provide the best solution possible.

Drone detection provides airports with situational awareness to better deal with drone risks, assess the level of risk, and make real-time decisions regarding airport and runway safety. A multi-layered approach to drone detection paired with effective drone policies and procedures will allow your team to successfully and safely mitigate non-compliant drones when they enter your airspace.

When evaluating different types of drone detection technologies such as RF and Radar, ask questions about the limitations of each system.

Limitations and questions to consider:

For example, RF works really well to catch drones and pilot hiding behind buildings and in corridors. They can also identify the drone take-off location and flight path which is very useful information. The RF layer in my opinions serves as a good geofence layer that allows airports to monitor the airspace for drones that fly above a certain altitude or interfere with manned aircraft.

With the limitations of RF not being able to detect all drones and radar systems having a limited range of detection and are very expensive, we recommend airports look into adding a radar layer over key areas of your airstrips. The goal here is to improve the detection level over important, high-traffic areas. This approach works well for very large airports where it is almost impossible cost-wise to blanket the airport with a full radar layer.

We call this the layered approach that includes combining the technology to work together rather than picking one over another. With that being said, it is important to understand that every environment is different, and what works for airport A but might not work at airport B because of the environment and layout differences.

Also, I recommend that you only work with detection systems that offer open API and can integrate with multiple security vendors. This allows you to easily integrate the drone detection system and data outputs into your existing security management systems. For example, your detection system should work hand in hand with your surveillance system, access control, and even cybersecurity system when a threat is detected.

Lastly, I strongly suggest looking at detection systems that have achieved national-level certifications like Sandia National Laboratories or have been awarded a Department of Homeland Security Safety Act Certification or Designation. There are three DHS Safety Act Awards to look for: Certification, Designation, or Developmental Testing & Evaluation (DT&E) Designation.

Achieving these levels of certification shows a company’s dedication to putting their products through rigorous tests and safety checks. These companies are invested in providing proven security products that live up to their claims and are interested in more than just making a sale.

Drones are simply awesome, and they are going to revolutionize many industries especially within the security sector. They are going to keep exploding in numbers and use cases, assuring that concerns for security are only going to increase. Whether you are ready to invest in drone detection and drone countermeasure technology or you plan to in the future, at a minimum you should start by adding drones to your policy template and SOP’s and build help build public awareness.

The signs are 18’x24,’ and you can request up to 10 free signs for your location (no charge for mailing either).

What happened at Gatwick sets up an interesting 2019 for airports and the aviation industry as a whole. We will see!