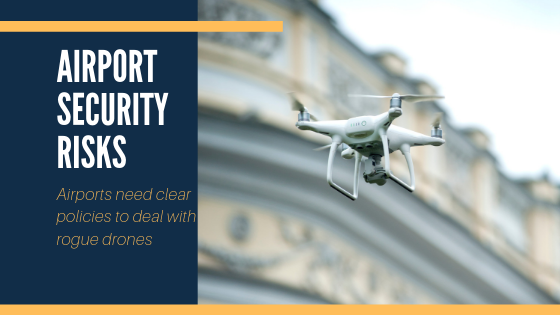 Welcome back to those following along, and hello to those just joining us. I am Robert Tabbara, CEO of 911 Security, a company dedicated to security that specializes in drone detection. I have met with many in the aviation industry, and you have shared your top concerns and questions about drone threats and drone detection. In this blog series, I will address those concerns and answer your airport security questions.

Quick recap: In post 1, we covered Issue #1: Drone threats, risks, and disruptions specific to airports. In post 2, we talked about Issue #2: Economic impacts so you can better understand the priority of risk and prepare to make security purchasing decisions. Today, we will discuss Issue #3: Drone policies and procedures related to airport security.

Before we dive in and talk about drone policies and procedures, I want to cover one question that is asked frequently by those in charge of airport security when discussing air safety and drone detection technology.

This question comes up all the time in my meetings. Personally, I do agree it should be the FAA’s issue. The FAA is the primary enforcement authority when it comes to national airspace and aviation. The fact is the FAA’s rules have made it difficult to do anything to mitigate a drone intrusion or even prosecute drone misusers. So far the FAA has prosecuted very few individuals for misusing drones.

In July 2018, the FAA released Guidance on Unmanned Aircraft Systems (UAS) Detection and Countermeasures Technology to U.S. airport operators stating it expected the “implementation of UAS remote identification requirements, to be more effective and cost-efficient to address the concern related to non-compliant UAS operations on and around airports.”

Since then, the FAA Reauthorization Bill of 2018 passed in October 2018 and events like Gatwick in December 2018 have opened doors for airports to do more while the government waits for remote identification and unmanned traffic management implementations.

Of course, I am not saying to go against the FAA. You should follow all FAA regulations as well as federal and state laws, but you can coordinate with various offices within the FAA's Air Traffic Organization (ATO) and seek approvals for introducing drone detection technology that doesn’t interfere with your existing airport technology.

With all that being said if an incident like Gatwick happens at your airport, what are you risking? Are you supposed to leave it up to the FAA?

“Are we going to have to shut down the Airport every time we detect a drone?”

During our meetings, I always stress the importance of having a clear SOP in place before you consider any drone detection system purchase. I start by recommending that you create a clearly defined policy with procedures on how your team will handle drone sightings and react to this threat based on the FAA laws, rules, and regulations.

When developing your policy, tough questions should be discussed and answered. For example, you caught a violator that is flying a drone outside the airport property but in a class C airspace.

The FAA has published guidance for law enforcement personnel to handle drone incidents and to deal with suspected unauthorized UAS operations. Law enforcement agents can contact the FAA Regional Operations Center or their FAA LEAP agent.

To answer the question, “Are we going to have to shut down the Airport every time we detect a drone?”, more directly, for now you might have to shut down the airport every time a drone is detected. If the FAA tells you do halt operations after a drone is detected, you will have to stop operations until you get the “all clear.” It doesn’t mean it will be this way forever though, just until everyone gets better at drone procedures and managing drone traffic.

How can drone detection help my airport?

What drone detection can give you is - the situational awareness to make better operational decisions when dealing with a rogue drone. If you can locate the pilot, local authorities can be alerted in real-time of the pilot's location and proceed to it. If he is on airport property, airport security can be alerted to perpetrator's position and advance to their site.

The faster someone can determine the pilot’s location and get the drone out of your way; the faster air traffic control can get flights back on track. If you don’t have an outlined procedure on what to do after a drone is detected and your detection system cannot accurately locate the drone’s flight path or pilot, drone detection itself is not useful. Just knowing a drone is somewhere close does not give you enough information to make informed decisions.

When tackling policy issues, you should also think about the good usage of drones and how your airport might use them. There are already several drone companies that have successfully demonstrated the use of drones for plane inspections, and they have been tested as part of the UAS Integrated Pilot Program (IPP) selected by the FAA.

The UAS Pilot program is an initiative aimed at identifying modern commercial applications for the growing drone industry and integrating UAS into the national airspace safely. Federal, state, local and tribal governments are working with private-sector and nonprofit partners to test drones and gather data to help accelerate UAS integration.

The Memphis-Shelby County Airport Authority (MSCAA) partnered with FedEx and Avitas Systems to make airport operations more efficient by using drones. During the pilot program, FedEx will use UAS for aircraft inspections and asset tracking, and will also assist in facility security and emergency response. Avitas Systems will be using drones to inspect runways/taxiways for foreign object debris.

It’s always good to start by meeting with your team to address your airport’s short- and long-term goals with drones before writing your drone policy. Drones policies are essential to promote the safe, efficient, and lawful operation of drones. You can Download our Airport Drone Policy template to modify and use as a starting draft.

In the next article, we will tackle Issue #4: comparing drone detection technologies and look at the limitations of drone detection to give you the knowledge to make informed decisions about your airport safety.