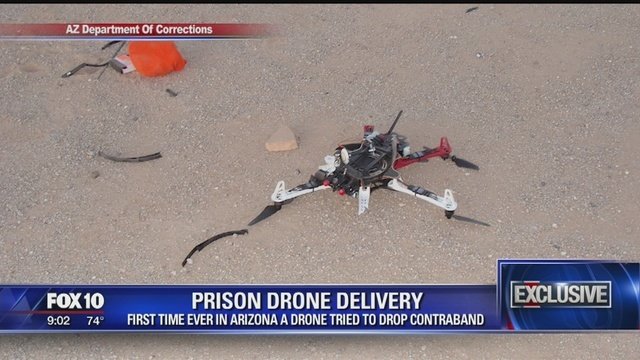 The United States prison system is far from perfect. Despite prison security measures, inmates still smuggle drugs, cigarettes, cell phones, and other contraband through security walls. This isn’t a new problem, but, it’s likely to get even more complicated with the rise of drone technology. In fact, South Carolina officers confiscate one cell phone for every three prisoners, according to NBC News, and that’s without the aid of drones.

While phones may seem like a small concern, some inmates use the phones to run their illegal business, blackmail other inmates, or intimidate witnesses. While most prisoners rely on visitors, guards, or other inmates to smuggle the phones, drones could soon serve as an easier (and cheaper) alternative.

Drone technology is advancing, and the public has access to tools that, in the wrong hands, could be cause for major prison security concerns. Even the prison system is vulnerable to breaches by these seemingly innocent unmanned aircrafts.

Drones are now capable of carrying items including drugs, weapons, and cell phones. Prisoners may use these items to blackmail, barter, threaten, or coerce inmates. Implementing a detection system could help reduce violence by reducing access to items prohibited by prison rules. Not only does this keep inmates safe, but it also makes a safer work environment for the officers as well.

Drone detection technology reduces power of criminals inside the system

Prisons have a unique economic system. Because cash is a no-go inside jails, inmates use items they can purchase at the commissary to trade for various purposes. Drone technology could introduce alternative contraband into the system, exacerbating power struggles with inmates or groups of inmates. Preventing the introduction of these items via drone could prevent future problems.

One prison is already using this type of technology to observe local drone activity, The Long Island Prison. They observed locals flying a drone near their property and weren’t sure what to do. While the drones weren’t a threat, prison security was able to put the new system to the test and observe ways the technology could protect their facility, according to CorrectionsOne. These systems can identify craft flying in the area, thereby providing security a chance to prevent potential breaches.

In July of 2017, South Carolina prison officials reported that an inmate had escaped from a maximum-security facility using wire cutters that he had obtained via drones. Officers eventually recaptured the prisoner after a two day manhunt. While some prisons have installed netting and higher fencing to prevent people from throwing supplies in from the outside, drones are now capable of flying over these blockades. This makes them a significantly less effective means of protection. Installing drone detection systems can help prevent these types of invasions.

Militaries already use drone technology to facilitate attacks against enemies. It’s not a stretch to think that this capability could also be used against a prison. Detection technology is a warning system that allows security and law enforcement officials to identify a potential threat before it’s close enough to cause major problems. Using this type of system can ensure that inmates, visitors, and employees are safe from outside threats.

Using detection technology protects the privacy of employees and inmates

While inmates are incarcerated for criminal behavior, there is a delicate balance between the public’s right to know and an individual’s right to privacy. In addition, prison records contain information on staff and visitors. Access to this sensitive information could put the privacy and safety of individuals at risk. Implementing a proactive system could help prevent data breaches and add a layer of extra protection.

Prisons are home to more than 2.2 million individuals in the United States. Additionally, thousands of Americans work in jails, and thousands of visitors visit facilities to spend time with a family member or friend. Innovative technology helps protect these people from outside threats and internal struggles. Taking a proactive approach to prison security is the best way to ensure that these facilities continue to function properly.